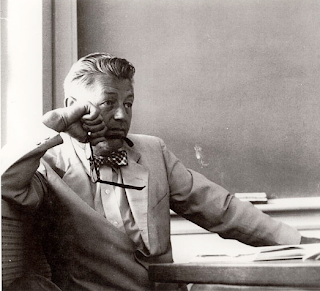 I picked up Stegner's Selected Letters yesterday. It was an urgent thing, because while this book has been in my Amazon shopping cart since l became aware it was out, I never felt rushed to get it until I saw that some doofus had left a ONE STAR REVIEW of it on Amazon.com recently. What kind of moron . . . . ? His reason is that he realized his fictional* college students are RIGHT, Stegner is an elitist snob. And then the doofus goes on to crack a joke, I guess, and mention that he supposes he should read Elizabeth Lynn-Cook's book Why I Can't Read Wallace Stegner: A Tribal Voice**.

Obviously I am forced to quickly come to his defense, not that he needs it. His work speaks for itself. He IS not an elitist snob. What is going on is that colleges are now swarming with students who think that being politically correct is proper and that no one should actually speak their mind if it goes against the fashionable current of thought. If a writer uses a word these students haven't heard on Prison Break or American Idol, that writer is clearly not interested in being understood. While I think it's true that some contemporary writers reach for the thesaurus too often and pick the obscure WRONG word rather than the right common word, this is just not the case for Stegner. His writing IS accessible and he is as clear as day. His writing is careful and thoughtful and he creates characters who are real and flawed, though ultimately good.

"I am afraid you are a romantic, my love. I am afraid you live in the clouds, and in the future—an impossible future, and I am afraid you are one of these essentially skinless creatures whom every blowing cinder hurts. So am I, or was I. Then I developed a suit of armor, and then you came and undressed me again. I’m not sure that I mind, even on principle. I know that at present I love it, but I’m afraid when I think that both of us are going to get hurt" (p. 21).

And I read this in a letter to biographer Jackson Benson regarding his request to do a biography of Stegner:

"There is the further fact that I have led a very quiet life. I have no marital upheavals, spectacular alcoholism, sexual deviations, madcap adventures, or attempted suicides to report. You might find that even if I told you to go ahead, you would have little to write about. Actually, what I have meant, to myself and I hope to others, is an individual attempt to understand and come to terms with a dynamic, forming, and unstable society, that of the American West" (p. 75).

I like it that he regards his life as quiet and that he is humble about it. He's not thirsting to have someone write about him because he was modest. He recognized that having written novels put him in a kind of spotlight, and so he was something of a public figure, but he wasn't the kind of public figure that relished the limelight.

His son Page writes this about him:

"His letters were not notes dashed off in the rapid-fire, shorthand fashion of today's email. Virtually without exception they were thoughtful, articulate, and carefully crafted, with attention to minutia (spelling, punctuation, syntax); they employed simile, metaphor, poetic imagery, deliberation of voice, and, above all, attention to the melody of language. . . . Like the company accountant in Conrad's Heart of Darkness, he would have been embarrassed to be found wandering about dressed in anything but an immaculate white suit, no matter how remote the exposure to posterity or the likely indifference of his audience" (ix).

The reviewer on Amazon.com who got me all fired up, whose thoughtless review compelled me to rush out and buy the book, wondered why he cared about Stegner after reading half the book. I guess he didn't get it, but I do. Stegner wasn't an elitist snob. Rather, he cared about his words and how he used them. His writing was his way of making sense of the world, of trying to understand and be understood, but in composing his work he wasn't immodest. He had Victorian values to a degree and recognized that one doesn't have to confess every impropriety to be transparent***, and I think this is evident in Angle of Repose when the narrator discusses his disgust about the loose values and hedonism of the 1960s.

Anyway, I know I'm going to give it five stars when I'm done. Stegner was right about his life, he wasn't some spineless, self-absorbed writer whose biographies would reveal a string of affairs and a drug-riddled past interlaced with deviant behavior. He has always struck me as humble, but willing to do hard work and get done what had to be done. And in that way, because these qualities show up in it, his work has always been refreshing and beautiful.


*My assumption. I don't know if they really ARE fictional, but the idiot struck me as too moronic to actually be a college professor. Perhaps they're stocking the colleges with morons these days.
**Both Kirkus Reviews and Publisher's Weekly slam this collection of essays. First of all, Ms. Lynn-Cook truly has NEVER read Stegner. She uses his name to simultaneously capitalize on his success and bludgeon him in one breath. What a girl.
***Contemporary style is to confess everything, resulting in graphic depictions of sex, violence, drug-use and every other kind of depravity that does not necessarily move the plot forward or lead to a deeper understanding of character.
Posted by Nicole at 5.2.09 2 comments:

My P90X dvds came yesterday, finally. I bought them from a seller on ebay and was a little worried I had been scammed or something. But no, "product was as described." Shipping slow. Very slow.

I think I will start on it next week. First I have to "get my kitchen ready" as the supplemental material suggests. Also I need a decent pull up bar. I bought the Iron Gym from Target last week and it doesn't fit around any of my doorways. They're enormous, you see, because I live in an old house. Pretty lame that they didn't make it adjustable. So I returned it to Target. I hope Target sends it back to the manufacturer and the manufacturer begins to get the message. One can only hope.

I bought about a million dumbbells and the thing about that is, when you're buying a twenty pound weight for twenty five dollars, all you can think is, "I'm paying money for weight. Weight! The object is nothing but weight." For some reason, it seems so indulgent. What a statement of the advancement of our civilization that people will actually spend money on WEIGHT*. I mean, sixty years ago my grandmother would have been ashamed to hear about someone throwing their money away on weight. But back then you worked hard for things, and unlike me she didn't sit around all day in a tiny cubicle reading for a living, cut off from the land. She was out in it, with the sun on her face, planting her garden. Ok, yes, I totally romanticize the hell out of my grandma. And yes, I would love to have a homestead and not work in an office. I love my job though. I really do. The days fly by and what more can you ask?

And by the way, I heard through the grapevine that my younger sister went to visit my grandma, who is sort of on her last leg, and my sister told Grams that they were going to name their baby (due end of this month) after Grams' mother. And Grams said, "That's cute as hell." Or she may have said, "Hell that's cute." The person telling me the story couldn't remember perfectly. But is that cute as hell? Grams says the cutest things. If you knew her you'd understand better why it's so cute. This grandma of mine isn't your sailor-mouthed, chain-smoking, somewhat frightening grandma. You know the kind. The kind that scares you with their tiny vicious mouth and wrinkled tattoos and husky voice. My grandma is pretty gentle and happy, and she has this laugh that sounds like bells and sunlight. She usually has a smile on her face and she's small, but strong. So when she says, "Hell that's cute," the contrast is fantastic and therefore adorable. Well, I miss her.

Next month: Before and after shots of P90X results.

*This topic is very similar to my recent experience and enlightenment about such things as "We pay cash for gold. Bring in your old jewelry and we'll PAY YOU for it!" I will relate that story another time.
Posted by Nicole at 5.2.09 No comments: